Let me introduce you to Jameson, a beautiful, intelligent, sweet tortoiseshell cat. When friends who had rescued her, gave her to me, they called her “Cali” (for Calico). I said no, that will not work. She is a tortoiseshell plus according to something I’d read, Earnest Hemingway said that cats like an “s” sound in […] 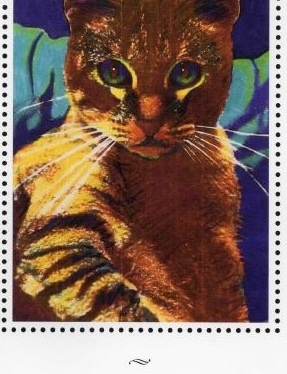 “Way down deep, we’re all motivated by the same urges. Cats have the courage to live by them.”  Jim Davis (Cartoonist)

“In ancient times cats were worshiped as gods; they have not forgotten this.”
Terry Pratchett (Author)

“A cat has absolute emotional honesty. Human beings, for one reason or another, may hide their feelings, but a cat does not.”  Ernest Hemingway

“Cats have it all: admiration, an endless sleep and company only when they want it.”
Rod McKuen (Poet)

“What greater gift than the love of a cat?” – Charles Dickens

“The smallest feline is a masterpiece.”
Leonardo da Vinci 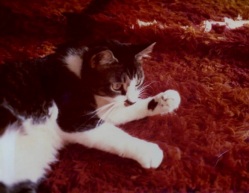 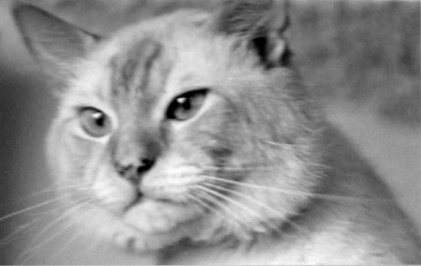 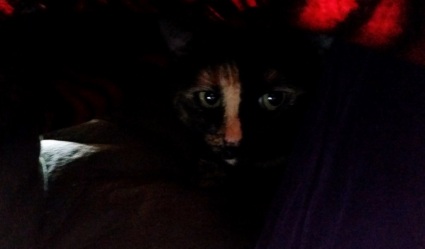 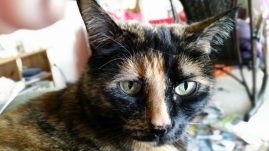 All She Needs Is Love ~ A Cat Tale

Bozo Was the Perfect Name ~ A Cat Tale 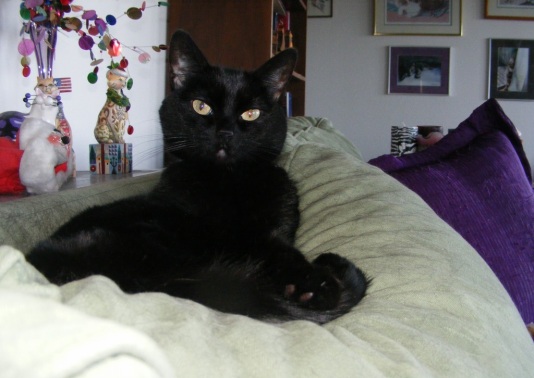 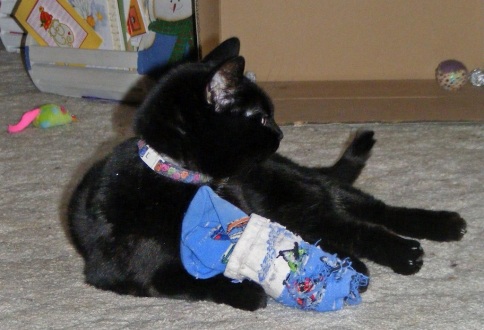 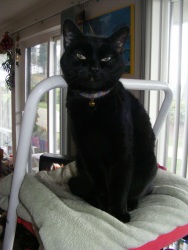 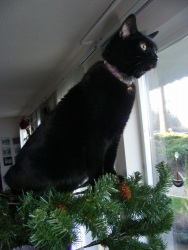 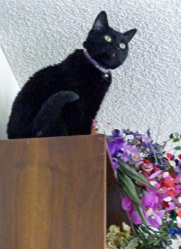 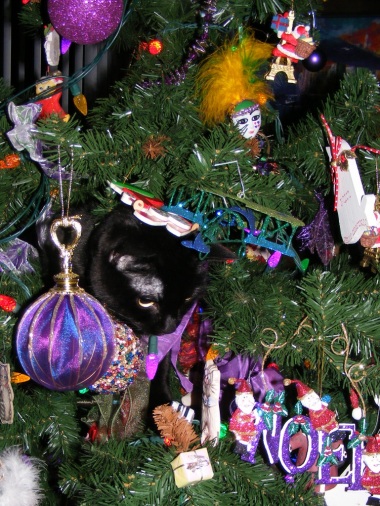 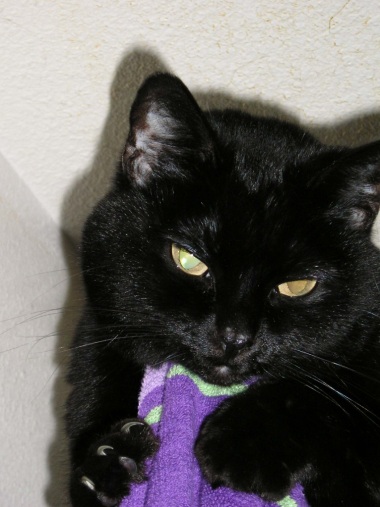 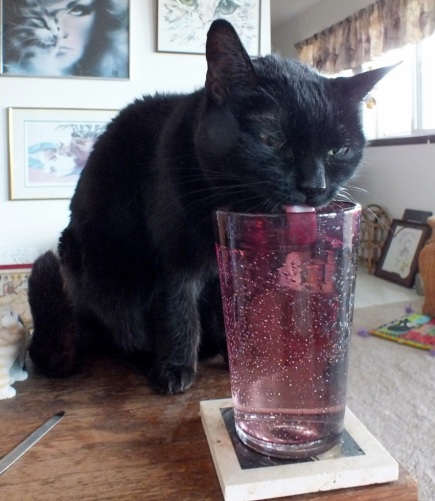 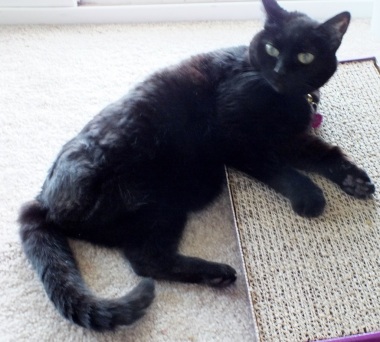 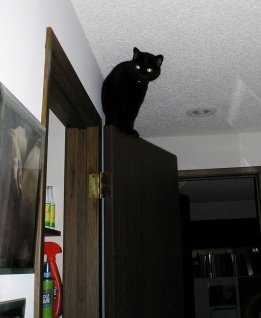 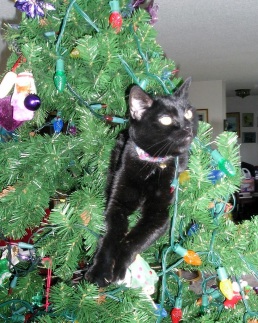 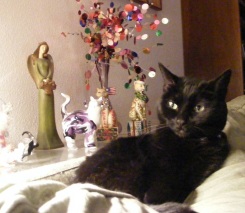 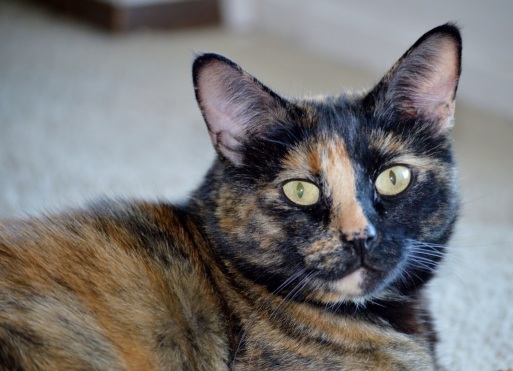 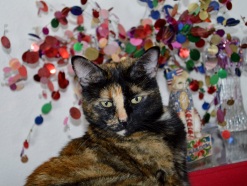 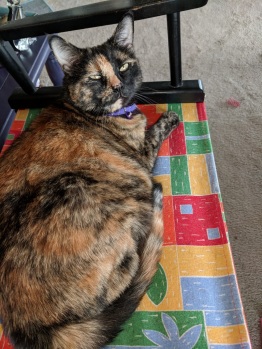 To read about Jameson, click the link   …. All She Needs Is Love ~ A Cat Tale

Take a deep breath — you can do this! Make a to-do list and be flexible.

Plan your route. The USA has a terrific interstate highway system with rest stops and information kiosks with very easy access to hotels, gas stations and food.

Reserve your room the day prior, considering weather and how far you think you will drive the next day. Reserve a ground floor room as you will be bringing not only your stuff into the room, but also your cat and food and toys and litter pan. Flexibility is key. Pick a hotel chain where most of the chain accepts pets. I used Choice Hotels and would recommend them.

Here is a link about my cross country trip from western Washington to South Carolina. I have many great memories of the trip with my cat, Shadow. She was the best navigator and I am so glad that I was fortunate to make such a memorable trip. 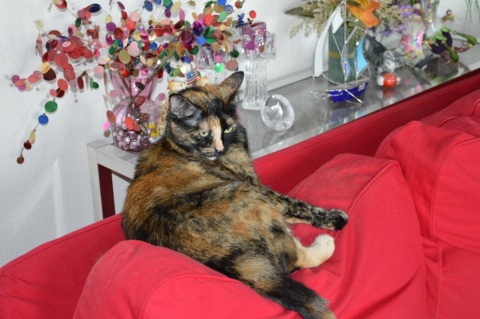 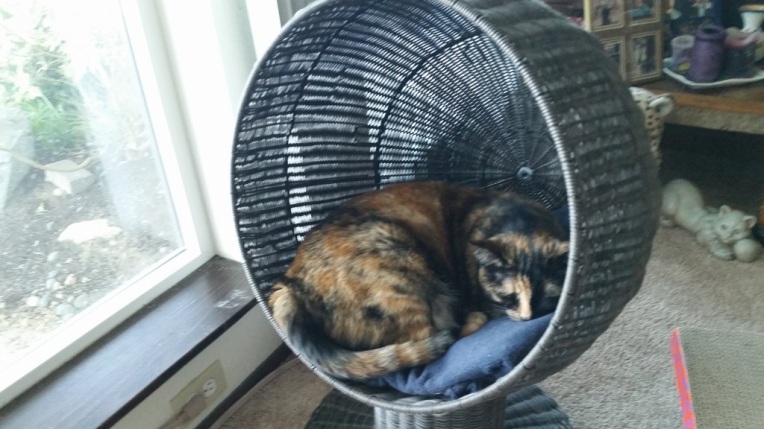 Several months after my beloved cat died, my friend Laurie called, saying that a cat had found them. She said that the cat would lay on a small boat they have on their property, until she was brave enough to go indoors. Laurie said that she calls her “Cali” as she is a calico and she also said that her two male cats, Paco and Rufus, were not accepting Cali.

She asked if I was ready for another cat. I replied, “no — not yet”. I explained that I was planning a month long driving trip to California and Oregon and did not want to get a cat and then go away. Plus, I still needed time before getting another pet.

Laurie said that she and Karl would check if any of their neighbors knew where she had come from and they would mind Cali for a while.

When I returned from my trip, I asked Laurie and Karl how Cali was doing and they said that Paco and Rufus had still not accepted her, adding “She is very sweet and mellow, perfect for you and all she needs is love.” I replied that I was not sure, as Cali had found them and perhaps she would want to stay with them.  END_OF_DOCUMENT_TOKEN_TO_BE_REPLACED

After my beloved cat Brandy died, I needed time to grieve before getting another pet. A few weeks later, my brother called and said that he was returning from Asia, where he had lived for several years. I said that he could stay with me while looking for a job and a place to live.

My brother went for daily walks and after about a week, he mentioned that he had seen a beautiful cat following him and each day the cat would follow him a bit further. Eventually, this beautiful part Siamese cat followed my brother to my apartment door. I left some food outside for it and very soon, the cat came indoors. We tried to find out if anyone had lost a cat, but fortunately, no one in the area knew of a missing cat.

What to name him?

As he was so beautiful, cream colored with gleaming blue eyes, I wanted a classy name for him. One day, he knocked over something and my brother laughed and said “What a bozo.” I laughed and thought that was so perfect, and Bozo became his name.

Turns out Bozo was crazy! He could be vicious and want to fight (in the middle of the night); meowed VERY loudly when I came home if I went out again (or even went to my car to get something); he craved attention for perhaps 15 minutes and then would ignore you. If he was on my lap and then I got up, he’d go crazy.

END_OF_DOCUMENT_TOKEN_TO_BE_REPLACED

Looking outside for squirrels

She would only drink water from a glass …

Socks had teeth marks from being carried about so often

Never knocked tree over … would sit on the branches …

Comfy on the sofa

Shadow came into my life when she was about four years old. A friend, living in Minneapolis with her husband and two cats, had recently inherited two additional cats from her husband’s nephew. Knowing that my cat had recently died, Mika called, saying, “Shadow is so sweet, but a bit needy. She would be perfect for you. Plus, four cats are just too much!” I laughed and said, “Yes, sounds like a great idea!”

Mika flew to Seattle with Shadow, staying the week-end. Shadow made herself at home immediately. I quickly discovered that my beautiful black, petite cat loved to climb, especially to the top of doors and bookcases. I was always amazed how she kept her balance. Very soon, her favorite place to sleep at night was next to my pillow and we quickly became best buddies.

Other places that she enjoyed climbing included a ladder, which I had used to change a light bulb. Seeing that Shadow liked it, I kept in open in the living room, putting a beach towel on the top shelf where she liked to take naps. She loved Christmas, climbing the tree both before and after it was decorated. Because she was so light, she never knocked the tree over, though I would find ornaments on the floor and sometimes she would meow for me to take her down from the tree.

When I accepted a job in Charleston, SC, Shadow accompanied me on my cross-country drive, sitting in her case in the front passenger seat. She loved exploring different hotel rooms each night, especially the high places.  Cross Country with Shadow ~ A Cat Tale (continued) …

END_OF_DOCUMENT_TOKEN_TO_BE_REPLACED

After ending the job-offer phone call, I enthusiastically screamed, “Hurrah” to Shadow. “I have a new job and we are moving.” Shadow looked at me as if she understood that our lives were about to drastically change. After a year of looking for work, we were about to move from the Pacific Northwest to Charleston, SC.

I immediately started “to do” lists with ”SHADOW” at the top. My intention was to drive, taking Shadow with me. When I brought Shadow to the vet and asked her what she thought, she immediately said “Shadow has to go with you!” She explained that Shadow would adjust to the car travel and spending nights in different hotels as she would be with me. However, if I left her with a neighbor, she would feel rejected and abandoned, especially since she was an older cat.

After I told my family and friends what the vet said, there was no more mention from them of Shadow not accompanying me. With my #1 priority worked out (more or less), I went about making plans for the move, finding an apartment on-line, working with a moving company and mapping out the trip.

Boxes began piling up and Shadow was an integral part of the adventure. She climbed on the boxes and seemed at times to be supervising the packing. Thanks to great neighbors, Shadow & I were able to leave the day prior to the moving company coming which made our departure less chaotic.  END_OF_DOCUMENT_TOKEN_TO_BE_REPLACED