After my beloved cat Brandy died, I needed time to grieve before getting another pet. A few weeks later, my brother called and said that he was returning from Asia, where he had lived for several years. I said that he could stay with me while looking for a job and a place to live.

My brother went for daily walks and after about a week, he mentioned that he had seen a beautiful cat following him and each day the cat would follow him a bit further. Eventually, this beautiful part Siamese cat followed my brother to my apartment door. I left some food outside for it and very soon, the cat came indoors. We tried to find out if anyone had lost a cat, but fortunately, no one in the area knew of a missing cat.

What to name him?

As he was so beautiful, cream colored with gleaming blue eyes, I wanted a classy name for him. One day, he knocked over something and my brother laughed and said “What a bozo.” I laughed and thought that was so perfect, and Bozo became his name.

Turns out Bozo was crazy! He could be vicious and want to fight (in the middle of the night); meowed VERY loudly when I came home if I went out again (or even went to my car to get something); he craved attention for perhaps 15 minutes and then would ignore you. If he was on my lap and then I got up, he’d go crazy.

I wondered if the people that had owned him had moved and left him? He never wanted to go outside, except to the balcony. He was very content being indoors.

Bozo had a set schedule: wake early for breakfast, sleep all morning, get up for about an hour at noon, then a nap, get up again about 4PM, stay up for dinner and play at night. In the evening, he was a “guard” cat. However, there were times when Bozo would wake me at 2AM, wanting to fight.

When I moved a book case from the living room to the bedroom, I emptied the books onto the floor, started to drag the book case and thought it seemed very heavy …and there sat Bozo, inside it, wanting to go for a ride.

When Bozo first came into my life, he ate cat food and was not finicky. That quickly changed: his favorite foods included Dannon fat free vanilla yogurt (and it HAD to be Dannon), Marie’s Lite Blue Cheese Dressing, deli turkey and some very specific wet and dry cat foods.

Because Bozo could scratch or attack feet or sit and stare at friends or be playful, when friends came to visit, they would always laughingly ask, “Will we see the good Bozo or the crazy Bozo?”

Flying with Bozo …. Quite the Experience

A few years later, I changed jobs necessitating a move from Los Angeles to Minneapolis, MN. The company paid for my relocation, including a first class ticket. Because I would be carrying Bozo plus luggage and getting a car rental when I arrived, I thought that taking a red-eye would be the most convenient.

I boarded the plane, put Bozo (in his zippered carrying case) under the seat in front of me and was thinking about my new venture. After take-off, snacks were served and then the cabin was darkened.

I was relaxing when the man sitting in front of me frantically started waving to get the attention of the flight attendant. When she came to see what he wanted, he said “there’s something moving on the floor!” I looked down and staring up at me was Bozo! How had he gotten out of the case? I immediately picked him up and considered myself very lucky that the people sitting nearby either laughed or remained asleep.

I put Bozo in the carrying case and kept it on my lap, petting and talking to him. Need I say it was quite the challenge to get a cart, collect my checked luggage, have Bozo in the the carrying case (with the broken zipper!), hoping that he did not manage to reopen it. I went to the car rental and from there to my apartment. And then somehow Bozo disappeared — after several frantic moments, turned out he had gotten in back of the refrigerator. Obviously, he wanted to explore the new place.

After two years in Minneapolis, I was transferred to Seattle and bought a new carrying case for Bozo. And, yes, once again he managed to somehow open the zipper. This time it happened in the taxi on the way to the airport. Panic time! I checked in all of my luggage and managed to keep Bozo in the case. This time I kept the carrying case on my lap and again was lucky to be sitting next to someone who liked cats.

Everyone who saw Bozo thought he was the most beautiful cat, with gleaming blue eyes. Only a few people realized that a little devil lurked behind those sparkling eyes.

Bozo loved our new home in Washington as there were squirrels and birds to look at and at night, Bozo stood guard by the patio door. I came to realize that he was waiting not only for squirrels, but also raccoons. After standing guard, Bozo would snuggle next to me. And yes, sometimes he’d wake me wanting to fight.

I have many fond memories of Bozo and consider myself very fortunate that we spent more than 13 years together. He was unique and definitely a character and I sorely miss him. 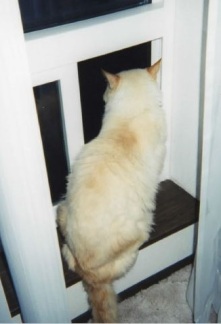 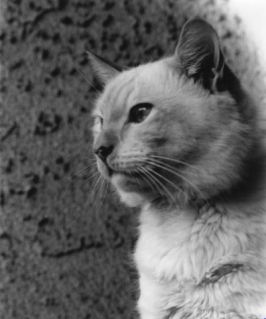 Too pounce or not to pounce, that is the question … 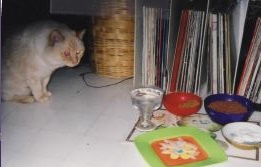 Water in a glass, deli turkey, yogurt … some treats … the usual… 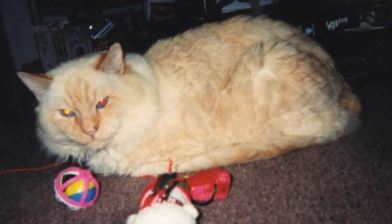 Deciding which toy to play with …

2 thoughts on “Bozo Was the Perfect Name ~ A Cat Tale”